Bandvulc products are fitted to drive axles with Uniroyal going onto steer axles.  Bandvulc and Uniroyal are both part of Continental Tyres operations in the UK. 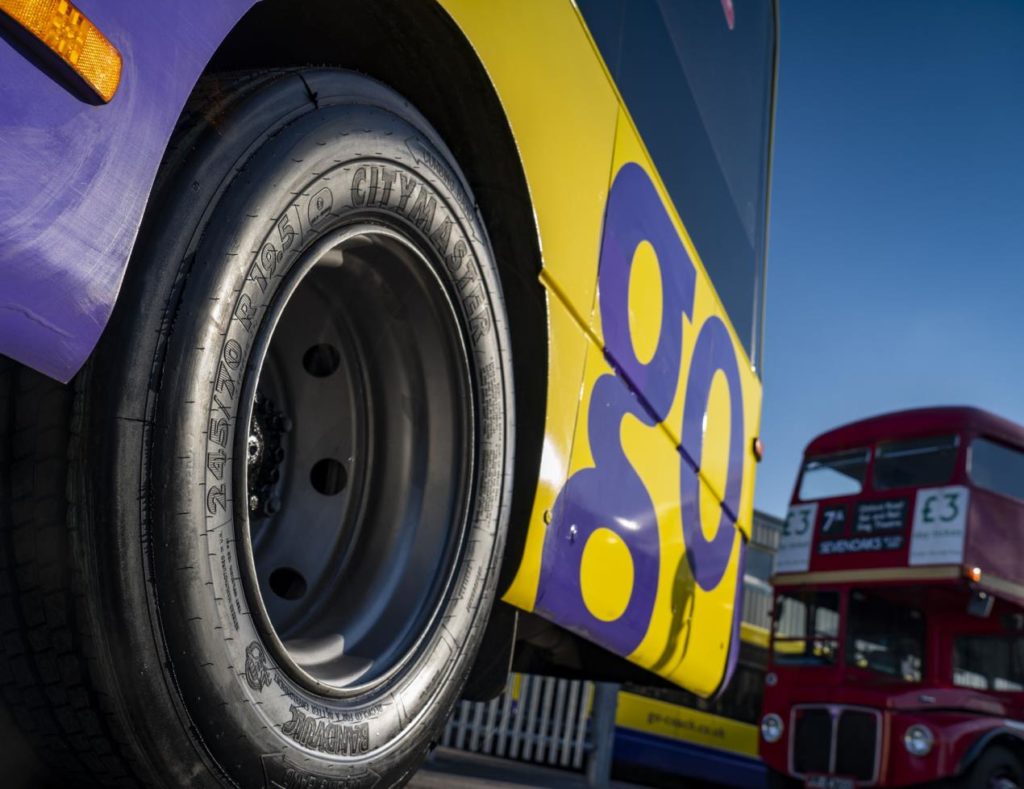 The Kent-based operator has seen its fleet grow quickly in recent years. Managing director, Austin Blackburn, says, “The decision to switch to a contracted Bandvulc/Uniroyal programme was a relatively simple one for me. The big challenge for any bus operator is always going to be side-wall damage. Our vehicles are constantly pulling into and away from kerbs as part of their service duties, and, in often-congested areas, repeated contact between kerbs and tyres is inevitable.

“What shouldn’t have been inevitable, at least as far as I was concerned, was the high level of attrition. We were losing tyres on a regular basis, and what made it worse was that I wasn’t happy with the general service life even when not damaged!

“In those days we were trying to manage costs and performance though a mixture of economy brands, but it simply wasn’t working – as vehicle numbers grew, so did the associated costs. We had a collection of local suppliers with a variety of brands, and were getting an increasingly inconsistent service in terms of pricing and tyre quality. I thought, ‘there has to be a better way than this’, and with the fleet growing quickly I decided to look at alternative ways of managing the situation. Even with budget tyres, this was already one of our biggest cost-centres.”

Austin Blackburn knew what he was talking about, having run his own ‘Bus Doctor’ business for many years prior to becoming an operator. “We saw it all at Bus Doctor, though mainly from the driveline side of life, but when you have a bus up on a ramp you can’t help but notice the differing rates of wear on various makes of tyre.” 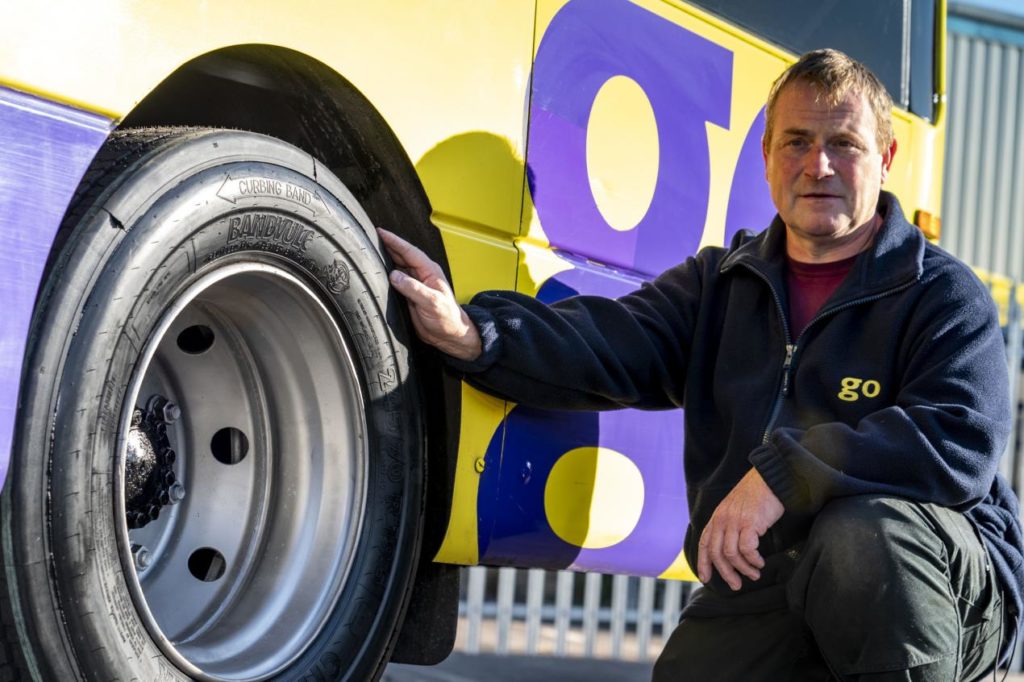 With the ‘economy tyres’ route not working, Austin Blackburn looked at premium manufacturers. After varied and largely disappointing responses to his initial contacts, he noticed a press report of a new Fleet Sales manager with Continental Tyres and approached him direct – the rest, as they say, is history. “Suddenly,” recalls Austin, “we went from being ignored by other manufacturers to becoming a real focus for Continental, and were soon meeting and thoroughly enjoying the input of the Bandvulc team. We shifted almost overnight from those poorly performing economy tyres to premium Bandvulc retread products, with another Continental brand, Uniroyal, available through Bandvulc for critical steer axle use.

“In fairness,” he continued, “I am anticipating a higher spend in Year One with this new strategy. We have to wash out those old economy tyres and some odd ones that have come on buses recently bought in for the fleet, but I am confident Year Two will see us getting pay-back from our investment with longer wear performance and much reduced sidewall damage. Although it’s still early stages for the new approach, I am already seeing massively reduced sidewall damage reports, and that is very significant.”

Perry Buckley, Regional Sales Director at Bandvulc, explains: “To reduce sidewall damage, we recommended that Go-Coach use tyres equipped with Armorband, our sidewall strengthening system. This offers additional protection around the tyre by providing an extra safety barrier against curbing. A coloured internal strip on one side provides operators with early warning should the barrier be compromised.”

Key to delivery of the strategy change at Go-Coach and its longer-term management reporting is local dealer Watling Tyres. “In truth, if I had one concern at the time,” says Austin Blackburn, “it was that the outstanding service from Bandvulc and Conti wasn’t going to be kept going by a local dealer. How wrong I was. Watling Tyres has been everything I could have wished for and has made itself a major part of the team.”

Go-Coach runs its own teams of technicians, who also handle wheel-fitting and have been trained on tyre regrooving by Bandvulc for use where appropriate. At the moment, both the Go-Coach team and Watling Tyres carry out routine inspections as they prepare for a hand-over to Watling Tyres, which will then use the inspections and fitting schedules to deliver routine management reports for the operator. “I am looking forward to that,” says Austin Blackburn. “The management information will be invaluable in monitoring and controlling costs as we get the fleet settled down fully into the Bandvulc/Uniroyal mix. It was OK being hands-on when the fleet was smaller, but times have changed and we needed to change with them.” 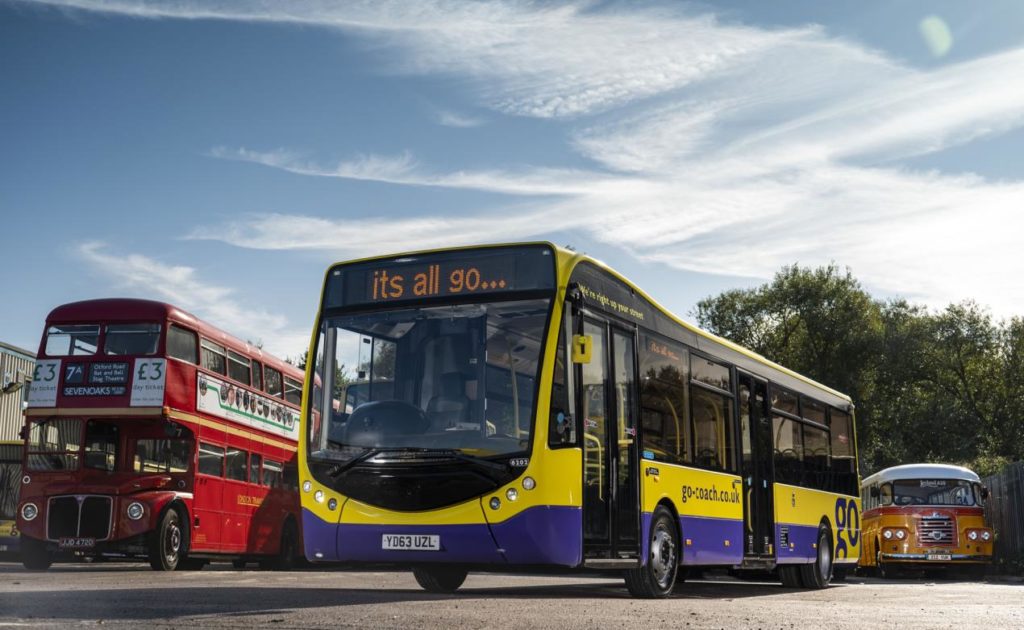